The Benefits of Automated Meteorological Networks in Africa

In October 2018, the U.S. National Oceanic and Atmospheric Administration (NOAA) issued a report ranking January-September of that year as the fourth-warmest on record for the same nine-month span of time. As part of the continuing trend of above-average temperatures globally, Africa had its fifth-warmest year-to-date temperature on record. As the planet warms, extreme weather increases globally, and the world’s second most-populated continent is unfortunately no exception.

During a 2018 interview with DW Akademie, Dr. Joseph Mukabana, WMO Director of the Office for Africa and Least Developed Countries, said that, “because of poverty, some parts of Africa cannot cope with hazardous weather that causes a lot of loss and damage. East Africa has experienced a lot of droughts — for example, there was a recent drought in Ethiopia, and the government had to step in and mobilize resources to save lives. Last year, Sierra Leone and Liberia were hit by flash floods and mudslides in which hundreds of people died.”

To meet these kinds of challenges, hydrometeorological organizations in Africa are looking to increasingly leverage weather detection and communications technologies not only for more accurate forecasting and nowcasting operations, but also to more effectively alert and inform the public.

Weather radar is a fundamental component. A typical complete solution from Baron incorporates data inputs from a host of other sources, as well, such as satellite observations, forecast models and other types of sensors. Each of these solutions can be provided as a standalone system, or integrated into the customer’s legacy network using a unique level of integration capability.

Rainfall Analysis for Agriculture and Flooding 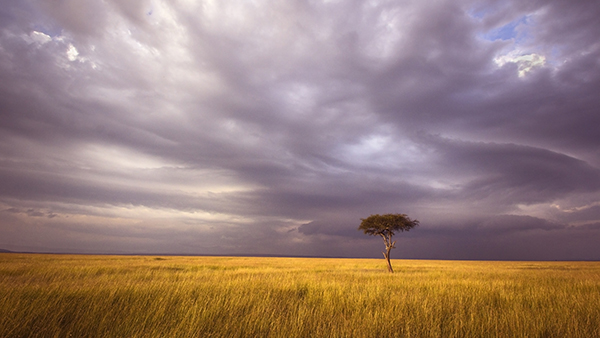 The countries of Africa often deal with drought and flood concerns, sometimes in an alternating fashion, where a region hard hit by drought one month could be dramatically affected by flooding the next. This occurred in central Somalia, where devastating flash floods displaced almost 175,000 people in some of the worst flooding the region has ever seen. This event occurred following a major drought the previous year. In addition to the tolls taken on human life during such events, the loss of crops in impacted areas has a major impact on yields, affecting both the financial and physical health of a community. Landslides resulting from these events take an obvious toll on life, as well.

In many cases, educational programs can help reduce the loss of life and property by encouraging proper land use, and educating the public on precautionary activities following a severe weather warning. Regardless of these efforts, however, timely detection and accurate analysis of flood-causing heavy rainfall enables weather advisories to be issued more effectively from the beginning. 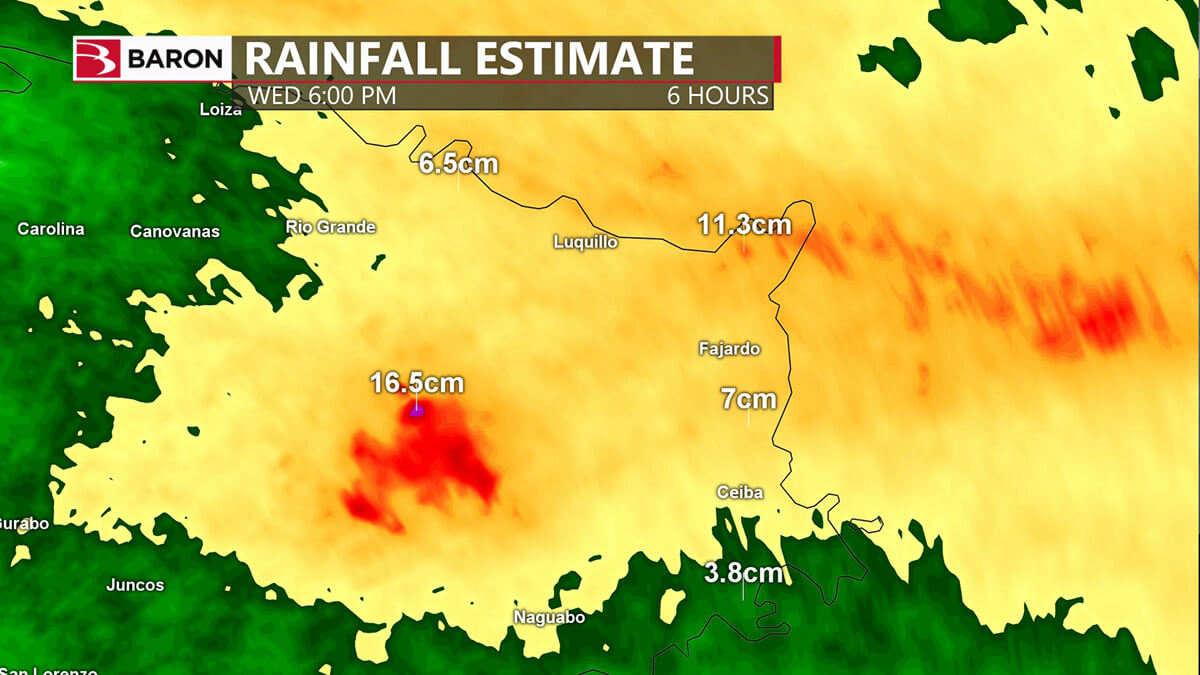 While numerical weather prediction is essential for effective prediction of an approaching hydrologic event, when heavy rainfall actually begins affecting the landscape and population, real-time radar analysis becomes critical. Using the NEXRAD network in the United States, Baron data scientists have developed a suite of single-site and composite radar data products for more accurate monitoring of precipitation rates and accumulations. Dual-polarization weather radar is employed for the most accurate raw measurements. The most recently developed data set provides meteorologists with accurate radar-derived rain accumulations for the past 1, 3, 6, 12 and 24 hours. Updated every 4 minutes and delivered in 1km resolution, these products deliver a comprehensive network-wide rainfall composite, using every radar site available in the network. 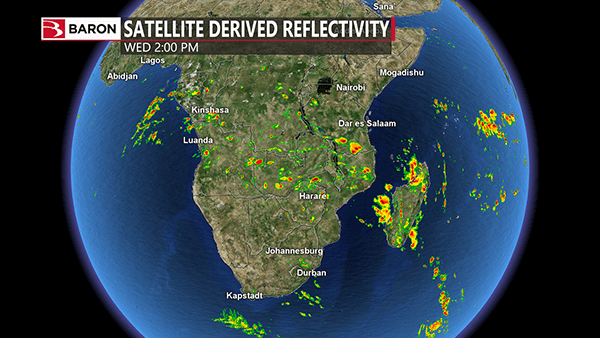 For locations where topography or budget do not permit the installation of a weather radar, Baron Satellite-Derived Reflectivity can be employed to depict simulated reflectivity patterns globally at very high resolution. Enhanced with forecast model data for accuracy, this product is also very useful for real-time analysis of approaching weather patterns over surrounding ocean or in nearby countries from which shared observation data is not available.

2018 proved an active year for hail in Africa. The province Gauteng, South Africa bore the brunt of an especially powerful hailstorm in October, along with strong winds and severe flooding. The hail turned the roadways in Laudium Pretoria a snow-like icy white several millimeters deep, though fortunately no major damage was reported. 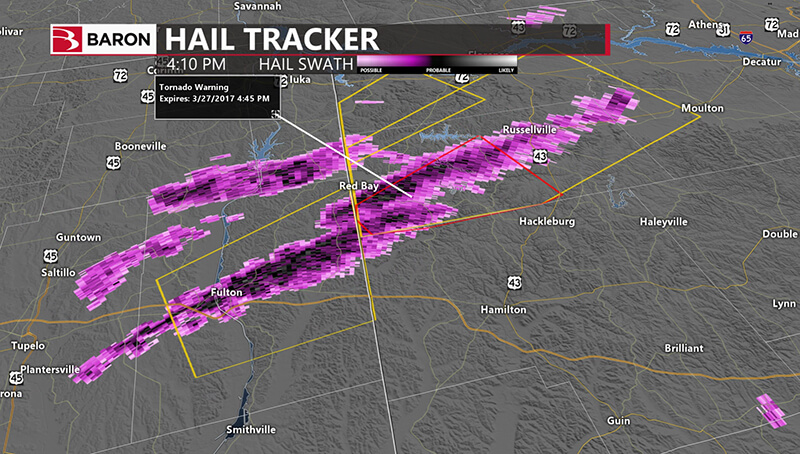 Radar-based hail detection has traditionally been performed by monitoring for reflectivity spikes within a convective thunderstorm. In the last decade, dual-polarization radar technology has enabled significant detection improvements through raw measurements alone, but particularly when value-added processing is applied. In the US, Baron has engineered specialized data products for hail detection and tracking, generated by sampling a storm with dual-polarization radar—in this case a NEXRAD station—at multiple volumetric elevations. The resulting data package is autonomously evaluated to accurately identify hail’s distinctive non-uniform shape, moderate Correlation Coefficient values, and near-zero Specific Differential Phase.

Detected hail patterns are then depicted on the display workstation, graphically isolated from surrounding rainfall. Additionally, processing can be applied to create a 1-hour composite of dual-pol hail data, allowing meteorologists to track the path of hail, providing enhanced situational awareness and aiding in post-storm response.

While tornadoes are far and away the most common in the United States, other parts of the world are not impervious; tornadoes can form anywhere a thunderstorm can occur. Several are known to have formed in Africa over the past few years, and fortunately most are not that powerful, similar to an EF-0 or EF-1 Enhanced Fujita scale ranking in the US, and incurring only light damage.

Radar-derived wind shear detection such as the techniques developed by Baron automatically identify rotating winds that can lead to tornadoes, depicting the location of these signatures through a circular icon, and giving the meteorologist instant awareness of an area warranting further manual inspection. Another radar-derived product, Baron Shear Rate, displays the rate of speed change in wind patterns, helping meteorologists locate areas where tornadic and downburst development may be occurring. Additionally, dual-pol radar information is also used in an automated manner to search for suspected tornado debris, and indicating the position of any concerning signatures on the map.

For both the Shear Rate and Tornado Debris Signature (TDS) products, a one-hour composite is also generated, allowing forecasters to track the movement of potential tornado touchdowns through the region, allowing damage paths to be more accurately determined, and making post-event disaster response more efficient. 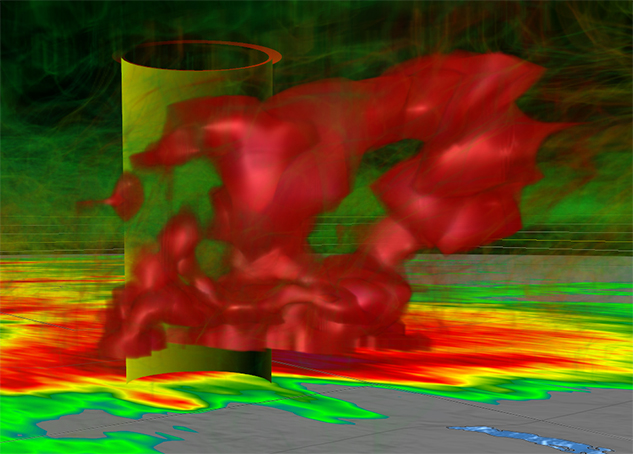 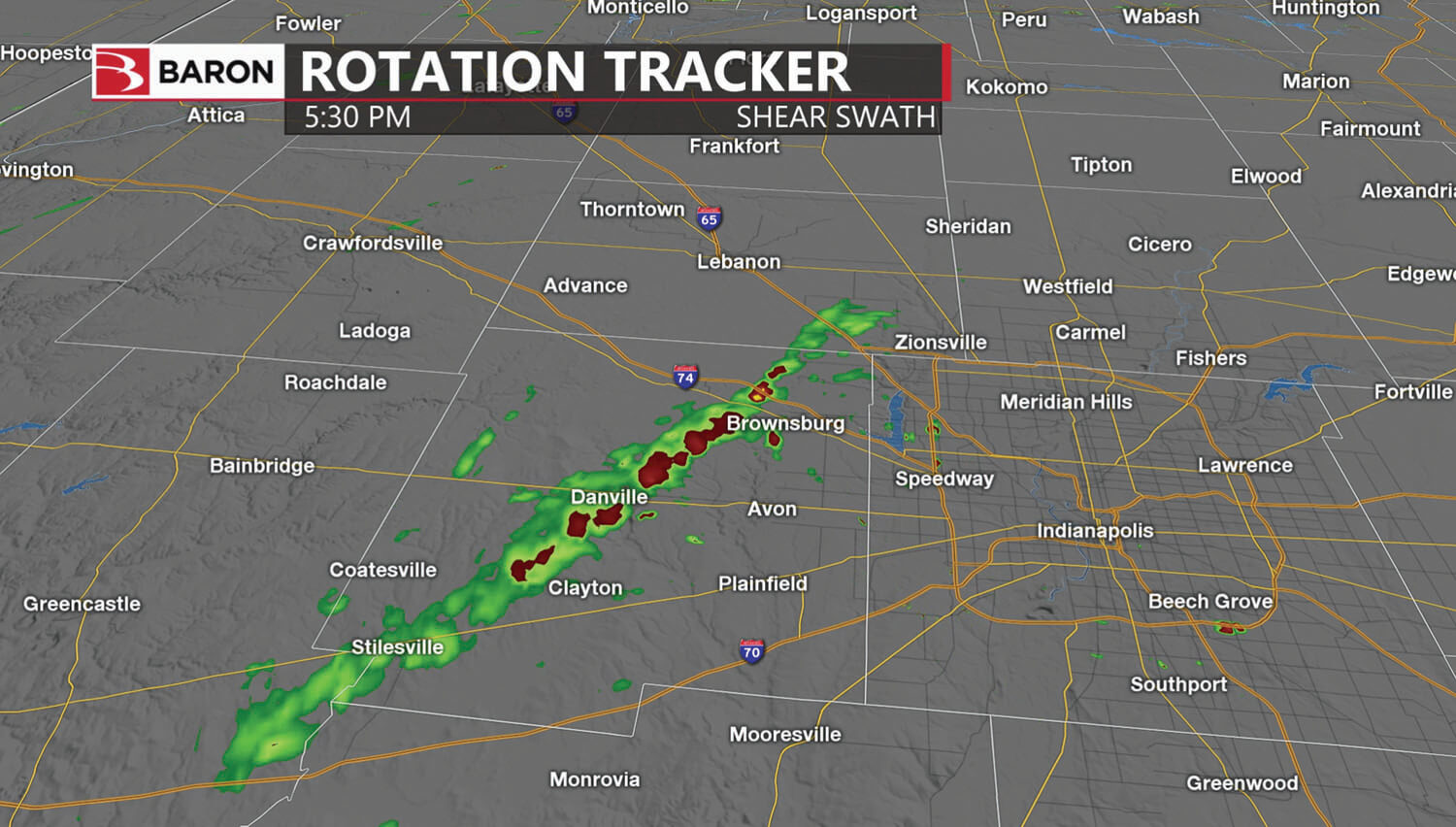 The Baron Shear Swath allows meteorologists to track the movement of wind shear over the last hour. In this way, the paths of potential tornadoes can easily be discerned.

Distributed display workstations provide staff throughout the decision chain with continuous access to the same information, helping ensure the effectiveness of decisions, and improved lead times for any issued weather alerts or advisories. 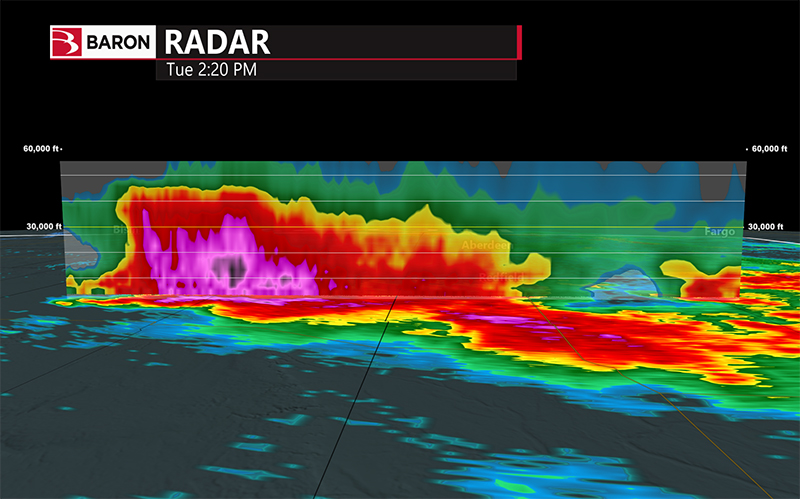 With Baron-provided installations, visualization is achieved through Baron Lynx display workstations. Meteorologists throughout the network can view radar information, and perform pathcasting and advanced analysis using value-added data products, volumetric imagery and RHI (Range Height Indicator) analysis, which allows the meteorologist to dissect slices of radar data for closer examination of previously unrevealed details, such as the high reflectivity values of flooding rains and hail cores.

The Lynx system may also be used for internal and public-facing weather briefings. The public communication 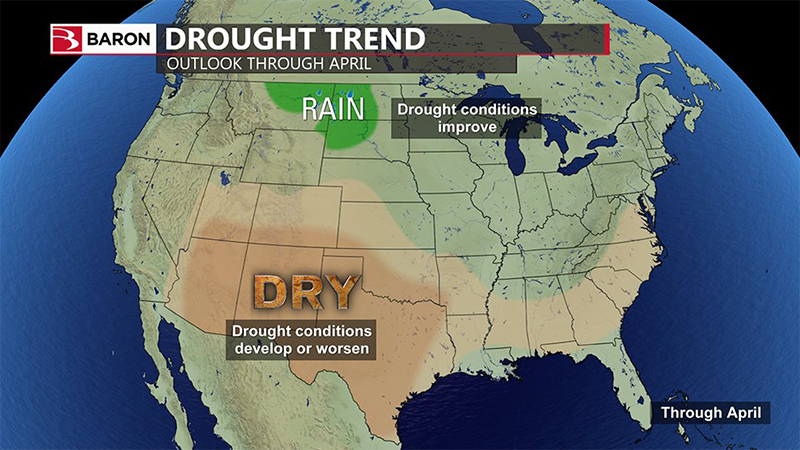 aspect is especially helpful, as it allows organizations to present television, mobile and web audiences with life-saving information using eye-pleasing, easy to understand visuals. Examples might include a drought monitor graphic, daily forecasts, or detailed information about an approaching storm.

Beyond these land-based applications, Lynx can also be used to visualize data from offshore and coastal data inputs, including forecast models, buoy sensors, sea state data and more. This collection of diverse data imagery provides organizations with a comprehensive view of conditions affecting military operations and shipping routes, allowing them to issue coastal and marine warnings more effectively, focus resources on areas of greatest concern, or advise marine personnel to avoid those areas altogether.

Meteorological organizations globally are challenged to reach the largest possible number of people during critical weather events. Oftentimes, this must be achieved using very limited budgets and resources. Networks can help with this challenge by streamlining operations and facilitating outreach both within the network, and outside it to the general public.

Personnel may opt to use their network to not only predict and detect a dangerous approaching storm or flood situation, for example, but leverage the same tools to instantly distribute automated or manual alerts to the affected population. Residents will receive these notifications typically via SMS text message and app-based push notifications. Weather information and visuals can also be efficiently posted to social media channels directly from a Lynx workstation, allowing more residents in affected locations to receive life-saving information. 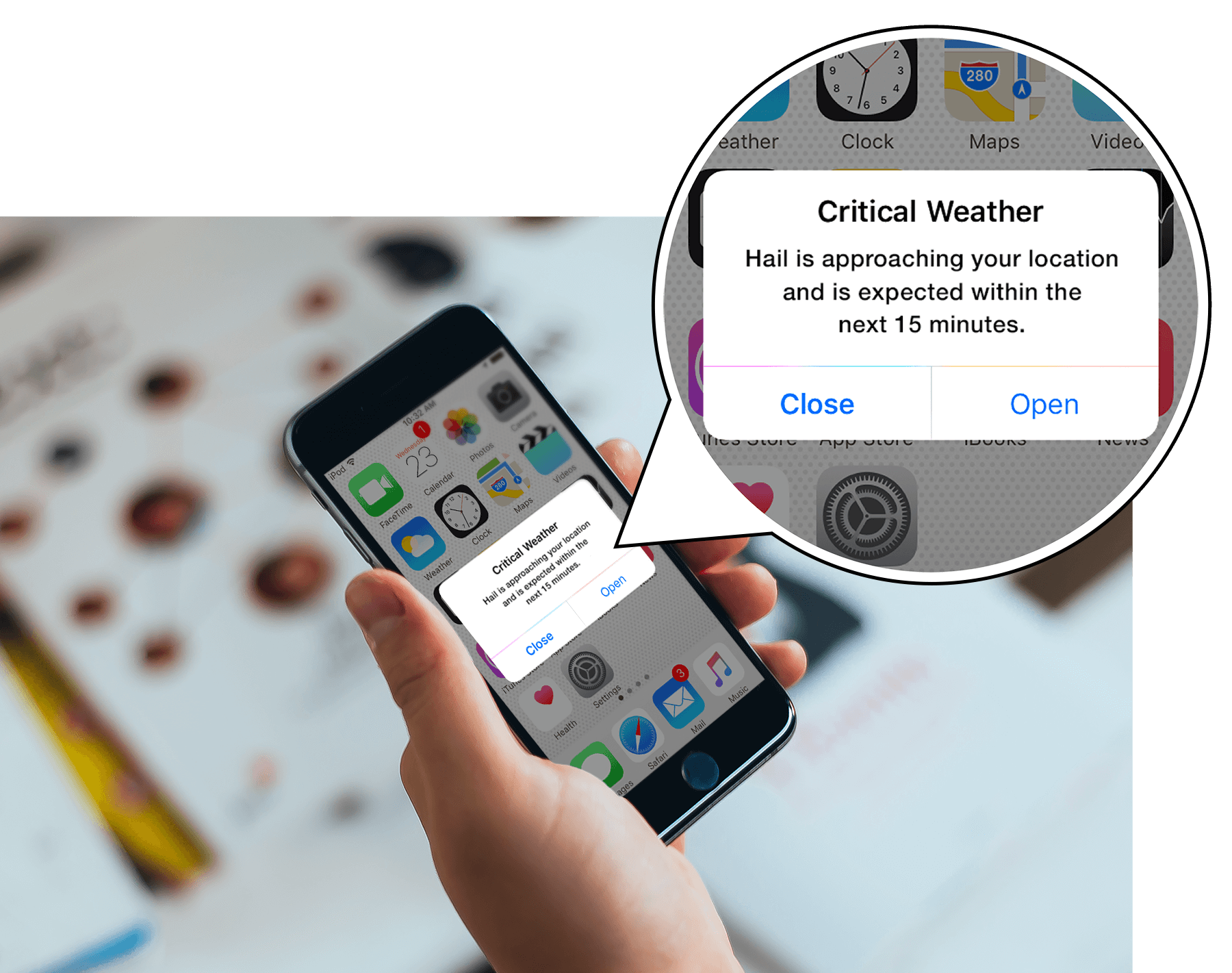 Automated processes continuously scan for dangerous weather conditions as detected by radar, such as rain, lightning, winter precipitation, hail cores and wind shear; the latter two alert types use volumetric radar scanning to create storm attribute tables and tracks from which these notifications are issued. Once any of these conditions are detected, alerts are automatically generated and distributed to residents in harm’s way. Custom push notifications manually entered by authorized officials can also be distributed to weather app users, such as user-generated text for a heat wave alert, or a vital notification about incoming severe weather.

From weather prediction and detection to value-added analysis and the timely notification of affected populations, the advantages provided by fully integrated hydrometeorological networks allow organizations to be more efficient and effective in their operations.

Using radar and other sensors to drive models and value-added data products are an important piece of the bigger picture, but that picture extends to display, distribution and alerting, as well. For example, with developing situations described in the sections above, all authorized personnel have continuous, immediate access to the same information, vital to the preservation of life and property, throughout the organization. When accurate information is widely dispersed to the greatest number of people, more informed decisions can be made, and in turn, more lives are saved.