How an Atmospheric River Can Disrupt Operations for Days

Two more rounds of heavy precipitation have fallen across California over the extended weekend as the series of storms associated with the atmospheric river pattern continues. The second (more recent) wave has dove farther south, dropping several inches of rain and snow across Arizona as well. 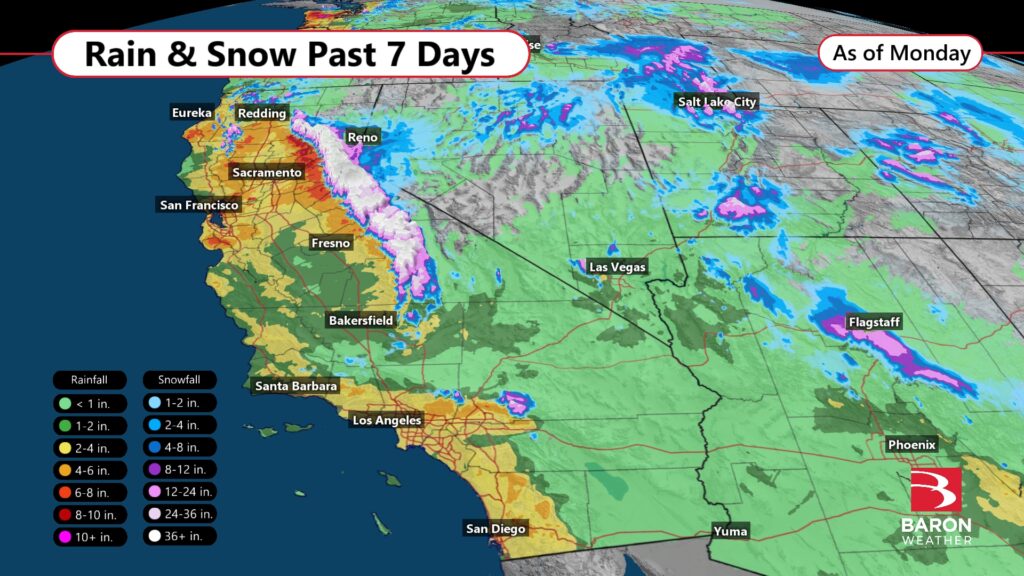 The active weather pattern that has been drenching and burying the Golden State is beginning to shift east. A weaker system moved through the Northern Plains Monday. This will be followed by a much stronger storm moving through the Rockies Tuesday and Central Plains Wednesday.

Here is an updated look at the Baron future rain and snow model through Thursday morning.

Future rain and snow, as shown by the exclusive Baron model.

This will be the last update related to California's atmospheric river. Be sure to read the entire post for a review of how it unfolded and how it formed.

After a Brief Break, More Rounds on the Way

Two-day rainfall totals exceeded 16 inches in parts of Ventura County, according to an update from the National Weather Service Tuesday morning. The series of storms have caused landslides, sinkholes, and flooded roads across nearly every county of California in the past ten days. It has also claimed more than 15 lives and prompted thousands to evacuate their homes. 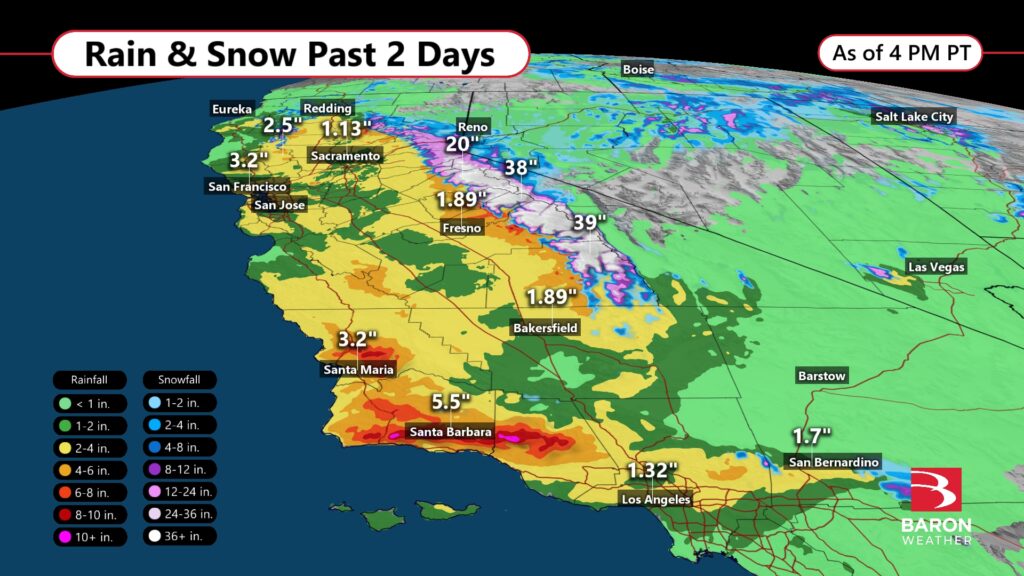 Central and northern sections of the Golden State continued to receive heavy rounds of precipitation Tuesday, but much of Southern California was beginning to dry out. However, Baron Weather Meteorologist Kevin Nugent says this so-called break will be relatively brief.

"The next particular series of strong, wet, and snowy systems will impact the entire state Friday through Tuesday, " he says. "This appears to be three distinguishable systems, and snow levels will be a little lower because these storms are coming in with colder air from the northern Pacific," Kevin adds.

The compounding rain and snow day after day make each approaching wave of energy increasingly threatening. Kevin says this atmospheric river pattern may not break until late next week (Jan. 19-20).

"By late next week, the upper-level troughs will shift eastward and be replaced by a weak ridge of higher pressure building in from the west," Kevin says. "Until then, there is high confidence that the stormy pattern will continue."

California is a beautiful state. Pristine beaches, soaring mountains, and fertile valleys are all within a day's drive from anywhere. And the weather is top-notch almost year-round.

But when a raging river of moisture relentlessly attacks the Golden State, it can threaten operations and assets on a massive scale.

A weather phenomenon called an Atmospheric River has been making news in California for the past week, drenching the state with inches of rain and burying the higher elevations in several feet of snow. And it will likely get worse before it gets better.

What is an Atmospheric River?

An atmospheric river is a product of a weather pattern, not any particular storm. When upper-level winds align just right, they steer abundant moisture from the tropical oceans poleward. When this stream of moisture reaches the middle latitudes, it gets pulled into areas of low-pressure systems that trigger or enhance precipitation. When these waves of energy and moisture repeatedly hit the same areas, it compounds their impacts. 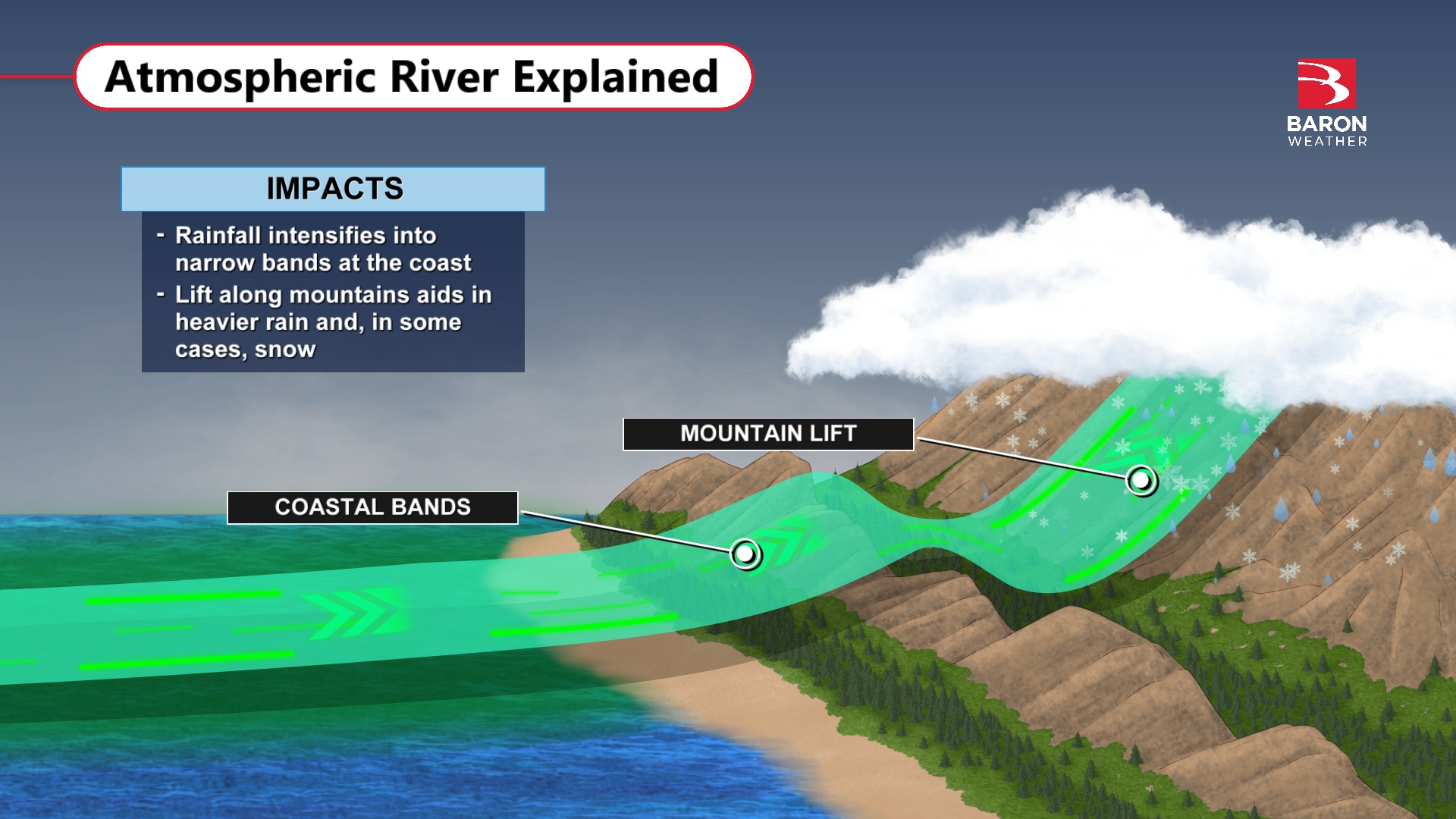 This setup has been in place over the eastern Pacific Ocean for several days. Multiple rounds of rain, high winds, and mountain snow have already moved ashore in California, producing flooding, power outages, and a heightened threat of avalanches. Short- and long-term forecast models suggest several more waves of precipitation are on their way.

More than a half foot of rain has fallen in parts of central California over the past seven days. In the higher elevations of the Sierra Nevada, more than five feet of snow has fallen on the highest peaks. Floods have washed out roads, and wind gusts over 50 mph have also caused numerous power outages.

Here is a look at rain and snow accumulation estimates from the seven-day period ending January 9, 2023.

7-Day rain and snow estimates from the Baron high-resolution composite, as displayed in the Lynx software platform.

Baron Weather Meteorologist Emily Dobbs used our high-resolution wind gust data to generate this ArcGIS map of maximum gusts (so far) across the region in the seven-day period, also ending January 9. You can zoom in and click on any location to see the highest wind speed reported during the period.

Preparing for the Next One

Preparing for extreme weather impacts from an atmospheric river is possible with the right tools and planning.

The first step is to trust a long-range forecast expert to recognize the pattern that leads to these extreme events. A meteorologist with experience in tracking the ebbs and flows of the jet stream can help you cut through the noise of viral weather maps shared on social media that may be misleading or confusing. The bigger picture matters far more than just one storm system in this case.

"What we look for are high levels of water vapor that extend from the tropical Pacific towards the West Coast, similar to a river," Stephen says. "This river can bring multiple rounds of precipitation, or they can sometimes only bring one or two depending on how persistent the event is," he adds.

The accumulation of this precipitation at a given location over time is what matters the most. Each round of rain or snow in itself may not cause much trouble, but a barrage of events in a relatively short period of time can prove costly. Trees and powerlines become increasingly more vulnerable to damage as soils become saturated. This is where reliable forecast models can help.

The exclusive Baron model below shows in great detail where the heaviest rain and snow will likely occur over the next three days. This is a snapshot of our model data for the period January 9-11, 2023.

Baron Future Rain and Snow model for the next 60 hours as of Monday afternoon.

In the map animation above, the heaviest rain and snow is forecast to shift into Southern California Monday afternoon and night, but Stephen said this break for central and northern parts of the state will be brief.

"Tuesday will be a transition day of sorts, with less concentrated areas of rain statewide. But on Wednesday, the next significant round is expected over northern California, just north of San Francisco," Stephen says.

High-resolution detection is key to making effective last-minute decisions as the rain falls and the snow starts piling up. There are always bound to be subtle shifts where the heaviest precipitation or highest wind gusts line up. Tracking these in real time with reliable radar imagery and short-term modeling is vital to keeping your mitigation plans on track.

You can view a sample of Baron's road condition data using the interactive map below.

No two atmospheric river events are alike. While there are similarities in how you might prepare for one, every storm’s path and strength are unique and require strategic thought and flexibility. The timing of your decisions can be just as important as the planning itself.

We hope these tips can improve the efficacy of your response by giving you confidence in when to make those difficult decisions. We've given you several brief examples of how Baron technology could benefit your organization. Let us know if you want to

and discuss how our superior weather data can help you make better winter weather decisions.