“It’s Not Easy Being Green”, So Say the Clouds

Green is what we want to see on trees, in our yards, or as a backdrop to beautiful flowers. But when it's seen in clouds, it soon won't be easy to stay outside.

As Kermit the Frog says in his signature song, green usually blends in with other "ordinary" things.  It was anything but ordinary when the skies over the Northern Plains turned green Tuesday. 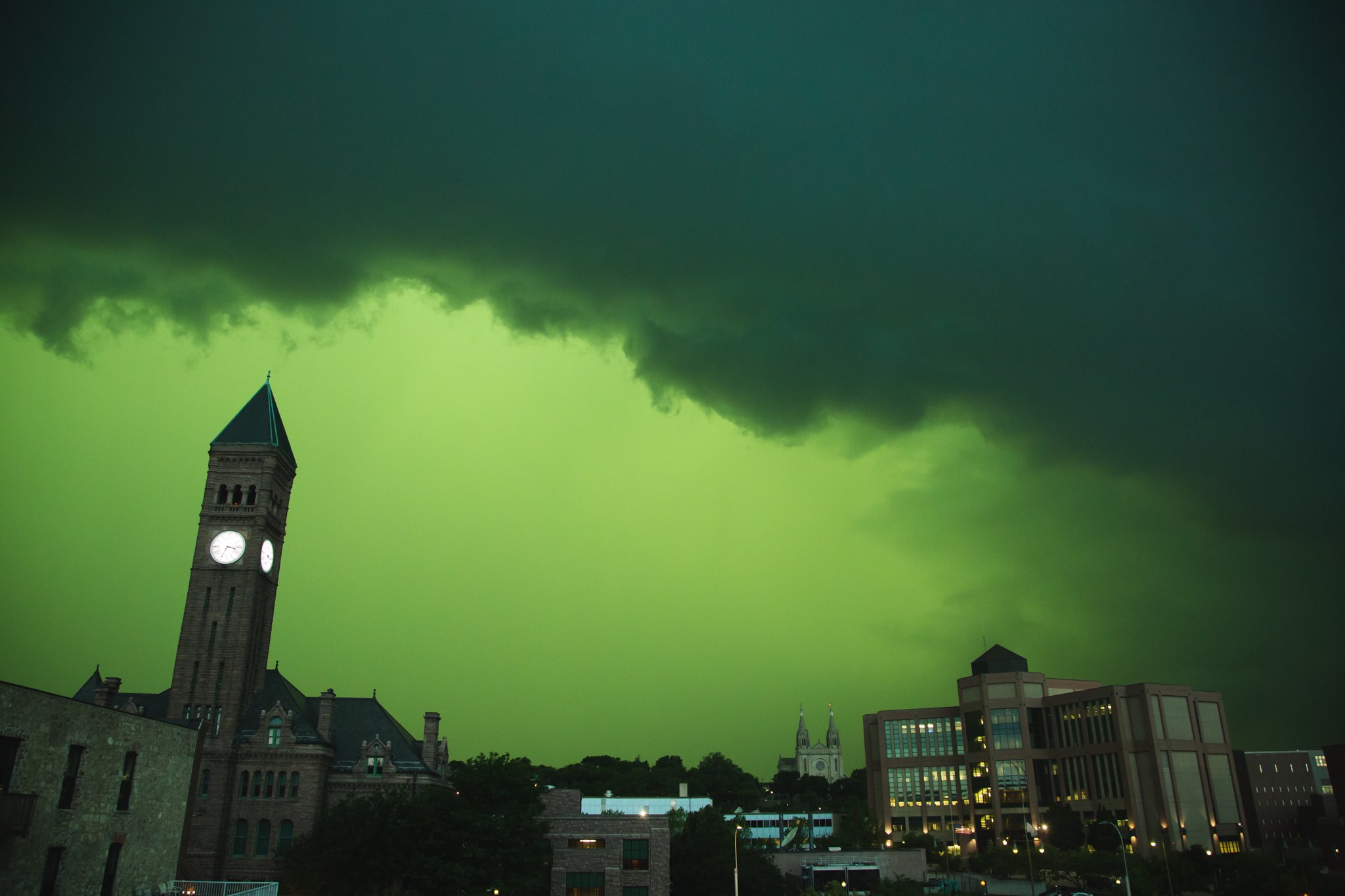 The slimy skies were seen by many over South Dakota, Minnesota, and Iowa Tuesday as a derecho barreled through. A few of the more popular tweets captured from the event are linked below. 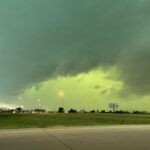 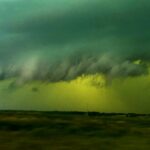 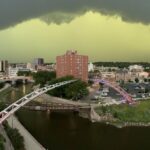 My buddy Duke just sent this pic of the storm rolling into downtown Sioux Falls. That's something. #sdwx (@shawncable/Twitter) 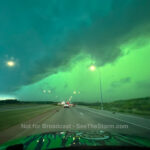 Why the sky turns green

Green skies during a thunderstorm are almost always a sign of rough weather ahead. Contrary to popular belief, a green sky doesn’t necessarily foretell a tornado. Rather, it’s a strong indication that large amounts of water and ice crystals are present in the clouds. Translation: heavy rain and hail are imminent.

The National Weather Service (NWS) in North Platte, Nebraska put this handy infographic together that explains the phenomenon. 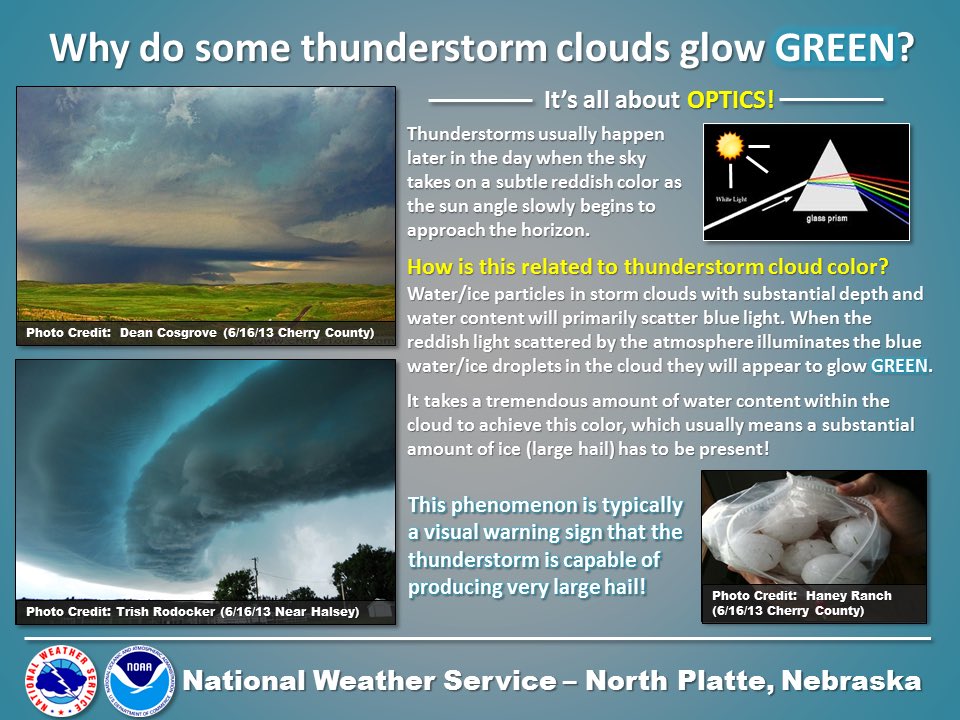 Infographic from the National Weather Service in North Platte, Nebraska on why thunderstorms sometimes glow green.

Optics and timing are the reason for unusual color. You likely learned in elementary school that blue and yellow make green (don’t tell Kermit!). When the sun is lower in the sky, such as at sunset or sunrise, the light must travel farther through the atmosphere. As a result, more molecules scatter the light and produce an array of colors.

When the yellow and orange colors scattered by the atmosphere illuminate the blue water and ice droplets, the clouds will appear to glow green.

“It takes a tremendous amount of water content within the cloud to achieve this color,” the NWS said. And it is typically a “visual warning sign” for very large hail, they add.

Hail certainly fell along the path of the destructive storms. Tennis ball-sized hail was reported in Timber Lake, SD.

Destructive winds are what derechos are most known for, and this one certainly lived up to the definition. The NWS in Sioux Falls released this preliminary report of numerous wind gusts over hurricane force. 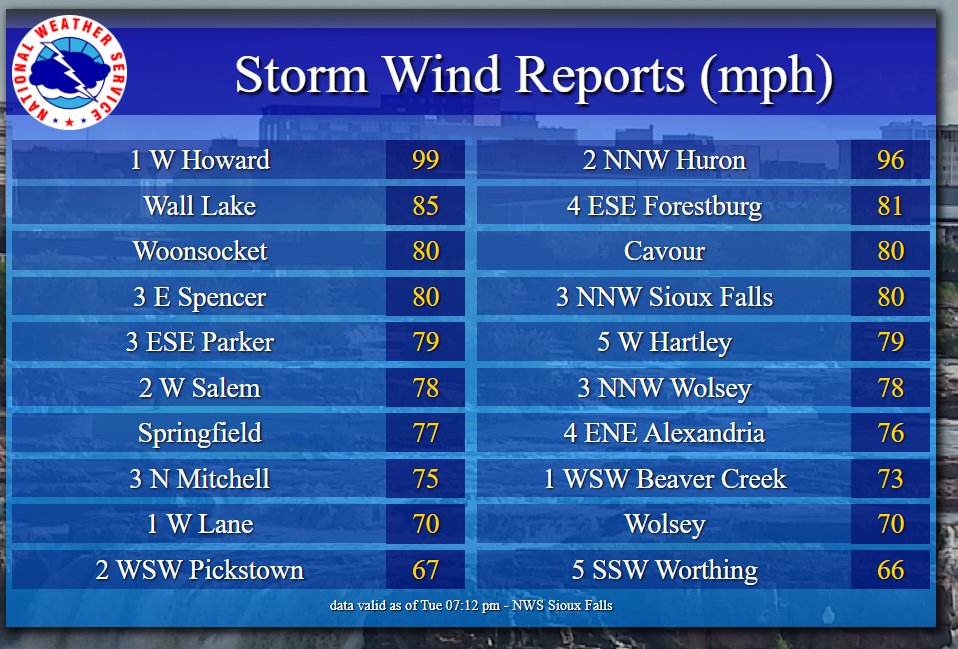 The next time you see a sky full of green clouds, you’ll want to put the cameras away and seek shelter. Hail and high winds are likely just moments away.

But hopefully, the skies won’t disappoint after the storm. And as Kermit says, it "could be nicer bein' red or yellow or gold, something more colorful like a sunset."