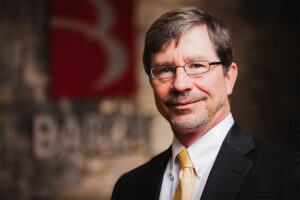 McHenry succeeds Dr. Kristie J. Franz, who had been in the role since 2018. Dr. Franz, the Interim Chair of the Department of Geological and Atmospheric Sciences at Iowa State University, is now serving as Chair Emeritus.

“It is a true honor to become the Chair as it affords me the opportunity for not only contributing to but learning from our many talented committee members,” McHenry said about his new role.

McHenry has his sights set on some objectives to accomplish in his term as Chair.

“Continuing to diversify within the sub-disciplines represented by committee members is an important goal. We also want to improve our internal committee organization to make it even more highly functional and effective within AMS as a whole,” McHenry said. “For instance, reaching out to other committees that cross-cut with Hydrology to host joint technical sessions at the Annual Meeting can be effective. Examples could include joint sessions with radar meteorology, agricultural meteorology, planetary boundary layer, high-performance computing, and even artificial intelligence. We will also be looking toward more effective use of social media to reach out to younger scientists.”

John McHenry is a 1980 graduate of the Massachusetts Institute of Technology, holding an M.Sc. degree in Meteorology. Prior to that, he graduated Summa Cum Laude with a double major in Physics and Mathematics from DePauw University in Greencastle, Indiana. McHenry has spent the majority of his career designing and implementing high-performance weather and related models. In the 1980s, he was a lead developer for the US-based Regional Acid Deposition Model (RADM). In the early 1990s, Mr. McHenry joined EPA’s “Models-3” team located at the North Carolina Supercomputing Center. There, he helped design and test the novel CMAQ air quality model, as well as lead several grant research awards, including the coupling of hydrological to meteorological (NWP) models. In the late 1990s, he became the first US modeler to successfully deploy an operational air quality forecast system. McHenry joined Baron in 2003, where he leads the implementation of cutting-edge operational meteorological, hydrological, land-surface, and air quality models, with a specific focus on very high-resolution explicit streamflow modeling, data-assimilation, and high-performance computing.