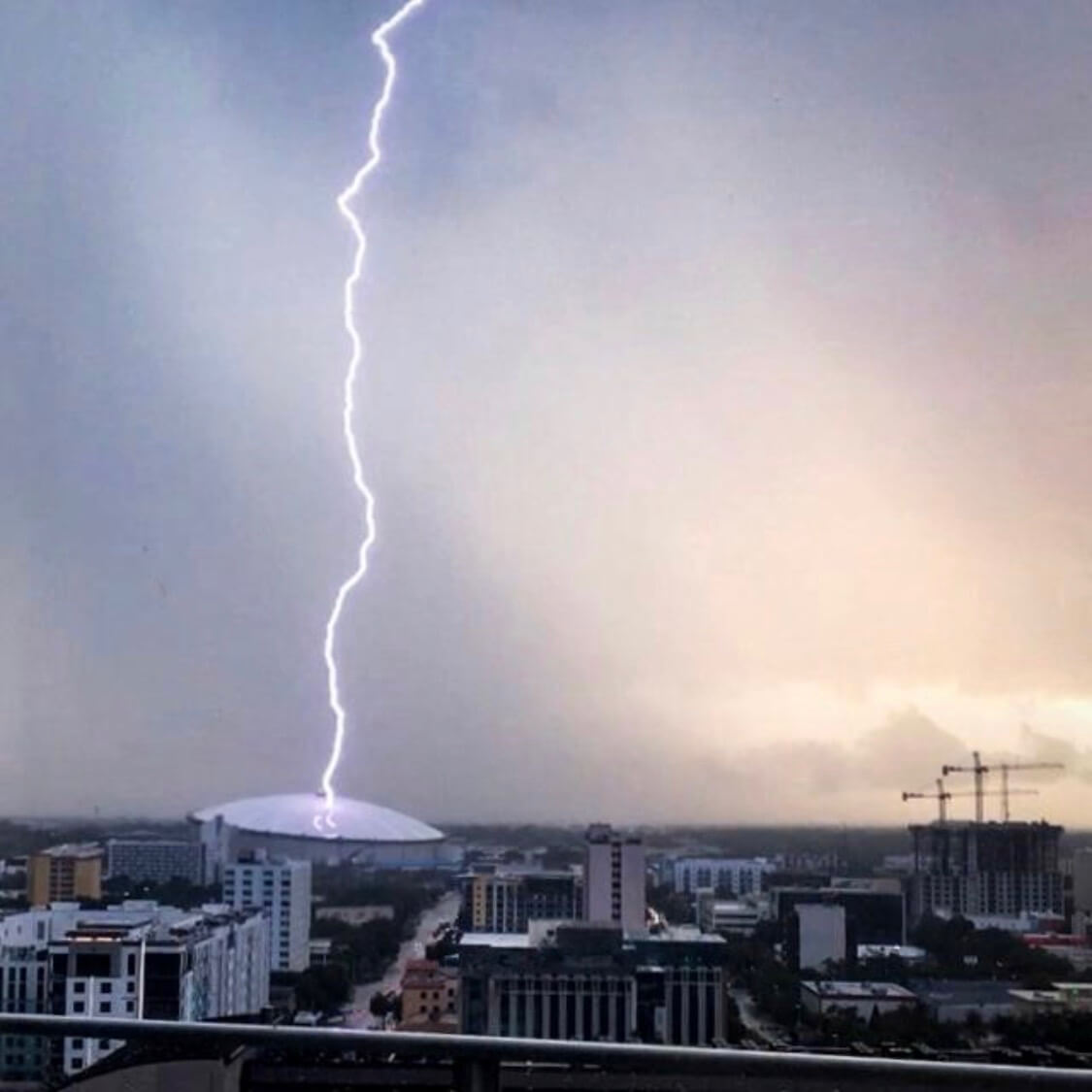 A September 2018 match-up between the Tampa Bay Rays and the New York Yankees drew an impressive crowd. Well on its way to filling, however, the Ray’s Tropicana Field suffered a direct lightning strike, and the stadium momentarily lost power. Tropicana Field had experienced lightning complications before—in 2014, the Orioles waited out a 19-minute delay after a lightning strike incapacitated a transformer on a powerline to the park—but the moment prompted urgency. At the moment of the strike, several thousand fans were still in the parking lot, either in their cars or attempting to make a run for the stadium. “We had to consider at that point the risk of allowing them to be outside in those kind of conditions versus the risk of not screening them for security, or moving security screening in the middle of a storm,” recounts Jim Previtera, Senior Director of Security and Stadium Operations for the Tampa Bay Rays. At that critical moment, the stadium’s staff needed to make decisions that could prove life and death based on limited information about the weather. That event led Previtera and his team to integrate a precise and customizable weather service software, Baron Threat Net, to improve safety at the facility. As a result, new information has improved operations decisions and improved Tropicana Field’s relationships with partners.

The Right Solution for an Extreme Weather Hotspot

Tropicana Field sits on a peninsula between the Gulf of Mexico and Tampa Bay in one of the most volatile weather locales in the United States. Thunderstorms can develop in minutes to replace previously sunny skies. A small storm can expand to cover the entire county in the span of ten minutes. Sometimes, half of the stadium will enjoy sun while the other half experiences a thunderstorm.

The September lightning strike along with a season of particularly bad storms prompted Tropicana Field leadership to seek a specific weather services solution for the stadium. All of those things led us to develop what the ideal solution we were looking for was. Previtera served 31 years in law enforcement, including a stint in the U.S. Secret Service, before managing safety for the Rays. For him, several capabilities were required to ensure safety. “The ideal weather service provider for us had to be somebody that could provide us with real-time storm tracking capabilities at our fingertips where we could actually control what we’re looking at,” he explains, “and we needed the ability to measure the threats posed by cloud-to-ground lightning. We live in what’s generally considered the lightning capital of the world.” Specifically, Tropicana Field required information on storm location, probable path, when the storm would arrive if that path included the stadium, and what threat or threats if any a storm posed to the fans, to our employees in the parking lot, and to the facility itself.

When Previtera attended a Stadium Managers Association meeting, he attended with these objectives in mind. There, he met a Baron Critical Weather Intelligence team member, who demonstrated Baron Threat Net by pulling up historical data for the stadium—from the day of the lightning strike. Lightning data is compiled from hundreds of lightning sensors from across the country that record lightning electric field waveforms. Within seconds, this data is integrated into and displayed on an interactive map in Baron Threat Net, showing users the location and the type of lightning strike. The service also tracks the path of storms with Baron Storm Track. “He showed me what we would have seen had we been able to access Baron Threat Net back then,” says Previtera, “I knew right then and there that I had found the weather service I was looking for.”

Before and after every game or event at the facility, thousands of people enter and exit. These crowds undergo systematic security checks at points of entry to the stadium. In severe weather, this process can take on increased danger. So, Previtera and his operations team must balance the importance of security checks with protecting people from harsh weather.

Baron Threat Net allows users to set up alerts for lightning occurring 5, 8, 10, 12, or 15 miles from a point. Lightning data provided by ENTLN Lightning

Prior to integrating a weather service software into this decision, Tropicana Field relied on television and web-based forecasts that provided general weather information about the entire Tampa Bay area, sometimes at a significant delay. This generalized view led, in the past, to a degree of guesswork. With Baron Threat Net, says Previtera, “we have the capability now to zoom in on our facility and to look at particular weather patterns or storm cells that we believe pose the greatest threat to us.” The increased level of detail adds information that often results in different decision-making. Previtera receives a daily email with critical weather concerns in the area, and hours before the first pitch, Tropicana Field staff is already monitoring the weather to ensure there are no pop-up storm or summer shower surprises. If a storm builds, the team sees predictions of its direction and speed of movement. “We’ve encountered situations where we probably would have altered our entrance plans had we not had the abilities that we have through Baron,” Previtera says. When Baron determines that a storm will pass prior to the opening of gates and prior to fans massing at security checkpoints, the Tropicana Field operations team has confidence that there is no need to make any alterations to the normal checkpoint configuration. “That has saved us a lot of work and a lot of stress,” adds Previtera. 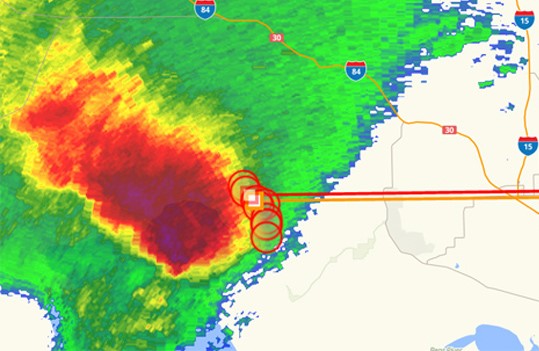 Weather information also adds value to the domed stadium once people are indoors, as strong winds or a tornado could pose a risk to the roof of the stadium. A 2018 waterspout threatened to make landfall and wreak havoc on the structure, and high winds from hurricanes are another possibility. “Having the ability to identify wind patterns that could possibly result in tornadoes is going to be crucial for us when we make the decision whether or not to stop a game and to move people to areas of refuge or safe shelter within the stadium,” Previtera says.

Of course, the effects of improved decision making through critical weather intelligence influences more than safety alone. Tropicana Field, like any stadium, functions through the collaboration of a variety of stakeholders. Baron-informed decision-making bolsters these relationships. “We’re able to communicate better information about the weather, and I think that has really improved our relationship with people, especially security and parking and police that are outside in the elements before a game,” remarks Previtera.

Previtera adds that the advanced capabilities also strengthen the stadium’s relationship with baseball. “For MLB, they’ll hear about anticipated weather threats and they’ll want to know what we’re doing to stay on top of the situation and to keep them informed,” Previtera explains, “and now we have that ability and they know we have that ability.”

Baron Threat Net even improves the trust of players and coaches in the front office. Available as a mobile app, the service gives Previtera information on threatening weather in any city the team visits for an away game, enabling him to alert the team to any changes that could affect them.

As fans were exiting the stadium after a 2014 NFL game in Tampa, at least seven people were injured by lightning. For a stadium in a location of extreme weather exposure, Tropicana Field trusts the speed, accuracy, ease-of-use, and specificity of Baron Threat Net. “The best thing for us has been having it in our command center, to have the ability to identify threatening lightning in real-time,” Previtera says. “My people are around me and they’re easily navigating the software to provide me with critical information to make the decisions we need to make to keep our fans safe. It impacts my decisions every day.”

See All Posts
We use cookies on our website to give you the most relevant experience by remembering your preferences and repeat visits. By clicking “Accept All” you consent to the use of ALL the cookies. However, you may visit "Cookie Settings" to provide a controlled consent.
Cookie SettingsAccept All
Manage consent

This website uses cookies to improve your experience while you navigate through the website. Out of these, the cookies that are categorized as necessary are stored on your browser as they are essential for the working of basic functionalities of the website. We also use third-party cookies that help us analyze and understand how you use this website. These cookies will be stored in your browser only with your consent. You also have the option to opt-out of these cookies. But opting out of some of these cookies may affect your browsing experience.
Necessary Always Enabled
Necessary cookies are absolutely essential for the website to function properly. These cookies ensure basic functionalities and security features of the website, anonymously.
Functional
Functional cookies help to perform certain functionalities like sharing the content of the website on social media platforms, collect feedbacks, and other third-party features.
Performance
Performance cookies are used to understand and analyze the key performance indexes of the website which helps in delivering a better user experience for the visitors.
Analytics
Analytical cookies are used to understand how visitors interact with the website. These cookies help provide information on metrics the number of visitors, bounce rate, traffic source, etc.
Advertisement
Advertisement cookies are used to provide visitors with relevant ads and marketing campaigns. These cookies track visitors across websites and collect information to provide customized ads.
Others
Other uncategorized cookies are those that are being analyzed and have not been classified into a category as yet.
SAVE & ACCEPT