Hurricanes are complex. And predicting their impact is complicated. Forecasts are getting better, and so can the way we communicate them.

How many times do you hear the phrase “but they said [this]”? Broadcast meteorologists hear it all the time, and it’s usually in rebuttal to an automated weather app that led them astray. This is most apparent during your hurricane coverage, where suddenly everyone becomes an expert.

We understand it’s not easy to stand out in a growing crowd of convenient commodity weather apps. This is where deeper data and creative expression can catch a new eye or retain a loyal one.

We talked independently to two Baron Weather experts who recently held a tropical weather webinar for broadcasters on how to overcome the misnomer that all weather information is the same. Their ideas have been summarized into four easy-to-remember tips below.

Gone are the days when a viewer sits on the edge of their seat for a five-day forecast. And since spaghetti models and hurricane cones are only a phone tap away, the “after the break” tease just doesn’t cut it.

But when the weather is about to turn disruptive, research still shows you will get their attention. So, here’s how to keep it.

Steve Bray is the Director of Broadcast Meteorology at Baron Weather, and his 37 years of experience in front of and behind the camera have taught him something very simple.

“Be there,” he said. “It’s the most crucial thing you can do for an audience that is about to experience a potentially traumatic event.”

Steve is not just referring to sharing information in front of a screen. He says a compassionate voice and knowing when to “change your tone” can go a long way in building trust during a difficult time. Your human touch, built around personal experiences and raw emotion, can circumvent the challenges in retaining a viewer’s attention during multi-platform long-form coverage.

Sometimes being present is more important than looking perfect. Especially when a critical update from the Hurricane Center comes at an inconvenient time in your studio.

Screenshots of the Weather Producer module inside of Lynx.

A tool such as Baron’s Weather Producer can make recording a video update that includes graphics and a behind-the-scenes look at your studio super easy. It’s an effective engagement practice to change up your look for social media, which can also help communicate the urgency of new information.

Pull Back the Curtain

Perception and reality can be difficult for your audience to differentiate, even on a normal weather day. Throw in an extreme event, especially one that has never been personally experienced before, and the job of communicating effectively is even more challenging.

This is a great opportunity to show off your decision-making skills and depth of technology. During a hurricane, you certainly have more time to do it.

“Viewers expect you to tell them why something is happening, not just that it’s happening,” Steve says. “You've got be able to pull back the curtain and use a variety of products to show those impacts in different ways,” he adds.

You’ve probably been frustrated at some point in your career – maybe even just this week – over the misuse of model data in a viral meme or GIF showing doomsday cat 5’s more than 10 days out. You can’t run from this. You must be the one they go to for the REAL science-based story on what may or may not happen.

The challenge in sharing more science, especially in the area of prognostication and probability, is keeping it simple enough for the viewer to understand while reinforcing that you can be their scientific filter.

Meteorologist Ken Brewer is Baron’s Traffic and Weather Integration Specialist. He has seen firsthand how much information there is to sort through during a hurricane.

“Don’t throw nine different concepts at them, throw them one or two and drive it home. Be consistent with the messaging every single time,” he advises.

Raw weather data, such as dozens of ensemble model lines, can be overwhelming. Finding tools that aggregate the data and derive a valuable takeaway are key to walking this fine line.

1. Use a derived product: The Baron Hurricane Index calculates a favorability rating based on atmospheric and oceanic conditions where a tropical entity might be present or moving toward. Complex parameters such as water temperatures, atmospheric moisture, and wind shear are simplified into a simple four-level scale of favorability. The color table can be customized in Lynx to your color and opacity preferences, and point queries can be created in strategic areas based on where a storm may be moving.

Explanation of the parameters used to create the Baron Hurricane Index.

2. Filter the models: Showing all model runs on where a storm may move is often not a credible way to communicate uncertainty. The Baron Lynx software makes it easy to set up a filter where you can choose which ones are reliable, then decide to assign a particular color opacity level to them. 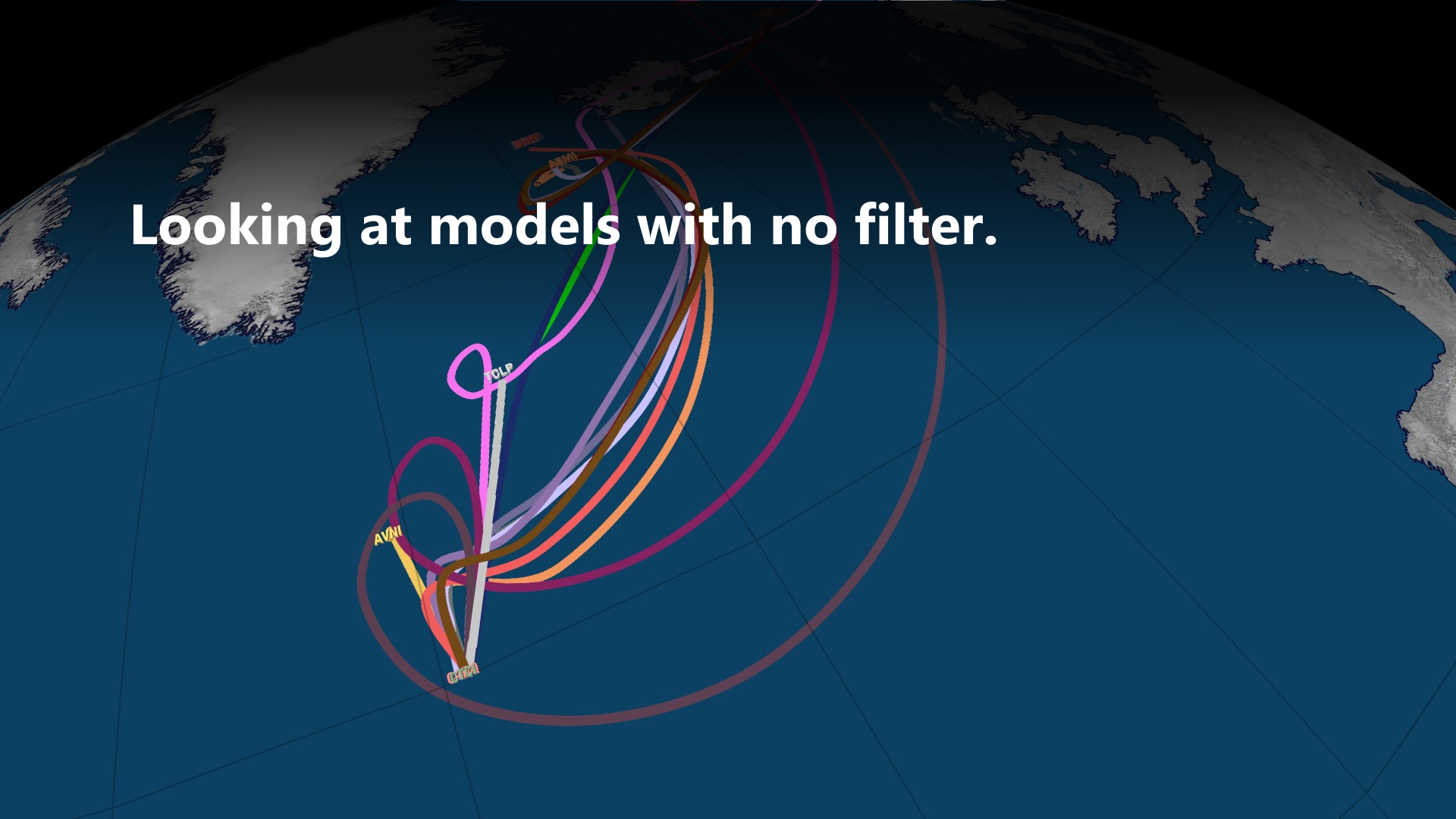 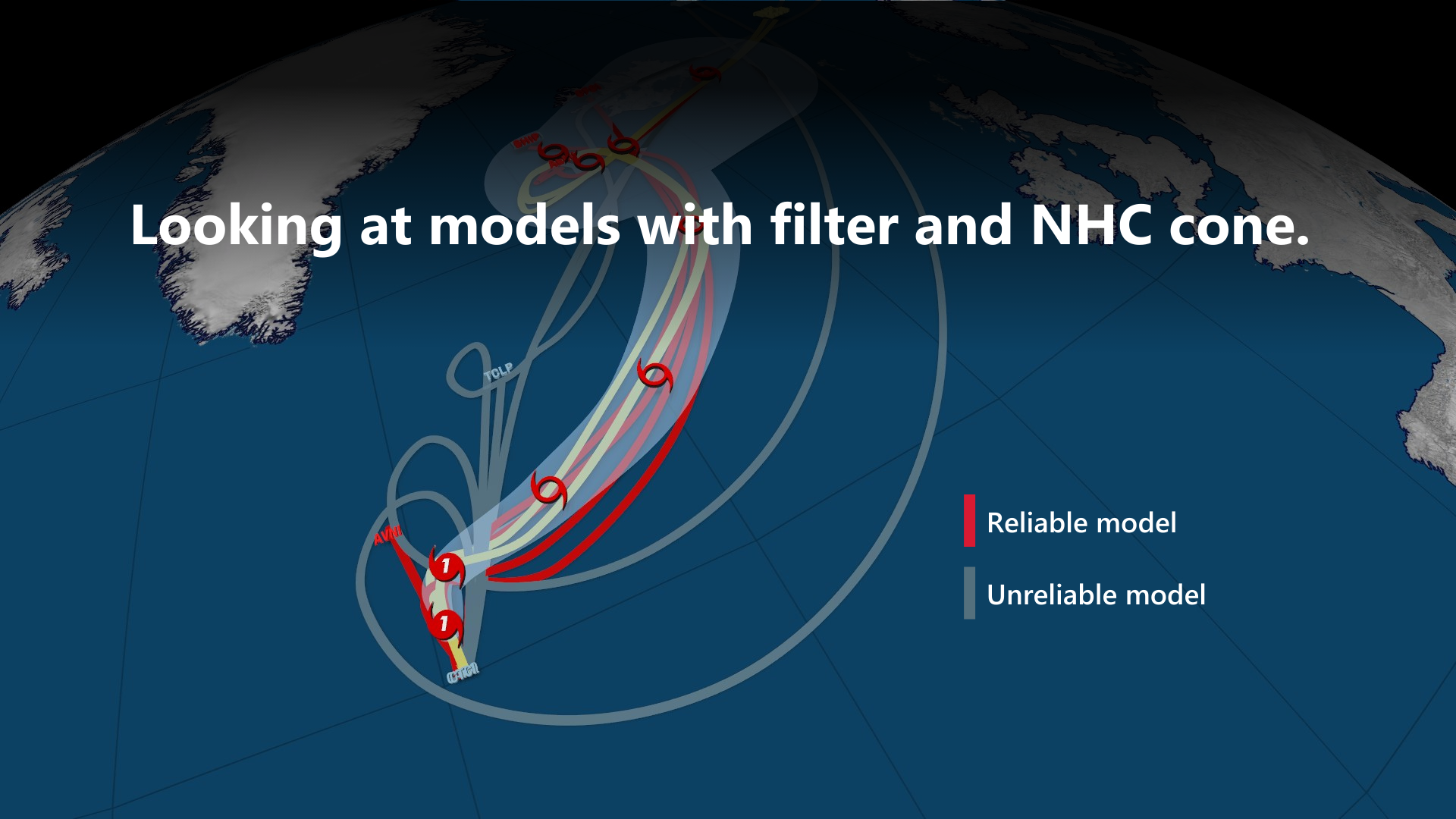 Weather maps can be a mess during a hurricane. So many watches, warnings, and advisories. Not to mention the radar can look like a veggie pizza.

“I think a lot of times there is too much soup on a map,” Ken says. “The viewer can get overwhelmed, and they will get nothing out of it,” he adds.

Expert radar and analysis tools can help you cut through a very cluttered map and focus on what really matters. This includes where rotating winds in a rain band might quickly produce a tornado when the tropical storm force winds will arrive, or where intense inland rainfall rates can cause flash flooding, just to name a few.

Viewers often understand simple colors like yellow, orange, or red to be “bad”. This doesn’t work when the entire radar screen is filled with those colors. The Baron Shear Rate product in Lynx can help you clear clutter off the screen and focus on the small areas of rotation in a hurricane’s outer band. This is essential to differentiating bad from “really bad” when a tornado may suddenly spin up.

Since the dawn of the digital age, dozens of weather sources can slide up into a viewer’s social media feed on any given day. And social science research tells us that the average viewer will review several of them to formulate their perception of risk. There’s simply no time for ambiguity.

Communicating a clear and simple message at all stages of a tropical weather event can keep you in the running as their “go-to” for potentially life-saving decisions. Rather than say ‘we don’t know yet', tell them what you do know and base it on credible scientific data. Educating your audience on the decision-making process and bringing them along every step of the journey unveils a layer of transparency they likely won’t find anywhere else.

Baron released a Decision-Makers Guide to Hurricane Response earlier this spring to help combat the “information overload” problem often associated with information flying around ahead of a potential hurricane landfall.

The heart of hurricane season is just around the corner, and we hope these tips and visualization tools can help your hurricane coverage rise above the noise and confusion other less-qualified weather communicators may create. At Baron, we aim to empower broadcast meteorologists to communicate in the most effective way possible in the interest of saving lives or mitigating the impacts on a viewer’s livelihood during a hurricane.