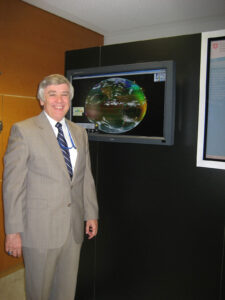 A retired US Air Force colonel, Jack began his career path as a weather officer working in South Carolina and Okinawa, supporting flight operations with forecasts and warnings. He found great appeal in meteorology’s challenging mix of aviation and the technical. “I discovered at first assignment that meteorology is, in a large measure, applied mathematics,” he says. “From my first day, I knew I had found something I could do for the rest of my life.”

After earning his Masters and PhD degrees, Jack applied what he’d learned to leading numerical weather prediction for the Air Force, followed by science and technology planning for the Air Weather Service. After retiring from the military, he took a position with the Litton PRC Company (now part of the Northrop Grumman Corporation) as the General Manager for the NWS Automated Weather Interactive Processing System (AWIPS). His team developed and delivered operational AWIPS stations at over 150 sites across the US.

In 2000, he transitioned to the National Oceanic and Atmospheric Administration (NOAA), where he held a number of executive positions in the National Weather Service, the National Ocean Service and NOAA’s Office of Atmospheric and Oceanic Research, before moving to Europe in early 2006 as the UN World Meteorological Organizations’ Director of the World Weather Watch.  In 2007, he returned to the US as the National Weather Service Director. There, he enjoyed a productive tenure of five years, with projects including the upgrade of the NEXRAD network to dual-polarization. Returning to the private sector, Jack later retired from full-time work at Harris Corporation, and took his new position at Baron.

We spent some time with Jack, discussing his work at Baron, and what the future looks like for meteorology—and its accompanying technologies—around the globe.

Welcome! Can you tell me about your new role here at Baron?
Primarily, it’s to use my operational weather experience in the US and internationally to help Baron translate its understanding government weather services’ needs worldwide into effective solutions to better service their countries. This includes weather radars, weather and hydrological models, and a broad spectrum of weather applications.

I interact with government weather executives in the US and in a number of countries in Asia, Europe, Africa and South & Central America and help them understand the value and benefit Baron solutions provide to their operations.

What present-day challenges are governments facing in protecting their populations from dangerous weather?
Several experts, including those at the Munich Reinsurance Company, have presented data which shows that the impact of severe weather has grown five-fold over the past three decades. One has only to review the impact of Hurricane Maria on Puerto Rico and Caribbean countries just last year to appreciate the need for stronger, more effective warning and preparation to mitigate what we can’t prevent.

At the same time, science and technology are providing opportunities for major advances in severe weather detection and prediction, which lead to increasingly longer and more accurate forecasts and warnings that can provide communities with more time to prepare – everything from deploying sandbags for flood avoidance and moving to basements and secure facilities when tornadoes threaten, to evacuations from coastal locations to escape potentially devastating hurricane storm surges.

I see several challenges facing governments today. Of course, the first is simply the budget process; we hear on the news every year about the competing needs of the US and weather improvements need to compete with a broad spectrum of national needs – the Nation’s infrastructure, health and wellness, and homeland security. The same is true in virtually every country.

A second challenge is communicating the threat to the public in a way that causes the right response. I can’t tell you how many times I’ve heard about people ignoring “turn around, don’t drown” signs, entering innocent-looking but powerful flows of flood water, and being swept away – many times drowning.

How can these situations be improved?
The budget challenges will never go away, so, in my view, improvements can still be made by committed people working together to chip away at the obstacles to better weather and hydrological services. It requires people in all sectors (public, private and academic) working as a global weather enterprise to advance weather forecasts and warnings to benefit societies worldwide. Such partnerships are succeeding on regional scales today; they simply need to be expanded and strengthened.

Also, better educating and communicating to the public about the nature of the severe weather threat in a way which triggers the right responses will save lives. The NWS, in partnership with other state and federal agencies, invests a significant effort in educating the public prior to tornado and hurricane seasons; similar programs are conducted for floods and other weather threats. These need to be continued and strengthened. 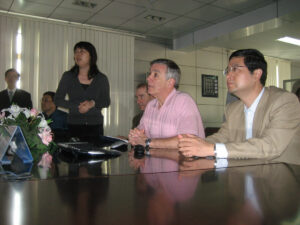 What are your observations concerning the global weather industry?
Weather has no geographic boundaries. What occurs over Asia will, in some form, move across the Pacific and impact the US. The WMO’s World Weather Watch program was initiated in the 1960s to motivate and strengthen international cooperation. Science and technology developed and strengthened as a result. Reliable weather forecasts in the 1970s were 1-2 days in length –

today we’re at 5-7 days – in large measure because of international cooperation sponsored by the WMO and the continuing commitment of all members of the weather enterprise.

Within the last year, a renewed effort to further increase cooperation and collaboration across the public, private and academic sectors has been initiated by the WMO in partnership with the World Bank. A key motivation includes producing improvements in developing countries where budget challenges are as great as, or greater, than in the US. This initiative called the Global Weather Enterprise Forum needs the support of the public and all three sectors.

What trends do you see forming?
Across the board, the trends are generally positive. Technology such as weather satellites, weather radars, and mesonets, is allowing the development and deployment of increasingly accurate observations at high enough resolutions needed by models to predict future weather accurately. Computer processing and data transmission are rapidly advancing, allowing higher resolution models to be run, and for more precise forecasts to be generated and communicated to the public and government/business decision makers. For tornadoes alone, the number of fatalities has been reduced by more than 50% since the 1950s and 1960s. I see no reason why continued infusion of new science and technology won’t continue this kind of trend for all significant weather.

Lastly, how do you see weather detection and forecasting evolving over the next 10 years? Or beyond?
I have great confidence that our research enterprise will produce new science and technologies that will continue to improve both the detection and prediction of weather which poses a potential threat to society. I also see more sophisticated applications which translate weather forecasts into more precise information on how weather affects an event, a system or decision – ultimately further reducing the potential impact to lives and property – and, indeed, mitigating negative economic impacts.

I see a time in the not-too-distant future where the potential occurrence of severe weather, such as hurricanes, winter storms, floods and tornadic activity, will be identified and communicated to societies worldwide well before the storms form, and with the precision needed to take action.